When I first realized something was wrong, I texted my mom my concern. Her name is “ma” in my phone. Instead of it going to her, the text on accident went to my friend Mary (who is Mexican). The text sparked a conversation and she mentioned Mayan massage. She told me her family members swear by it and have gone to small villages in Mexico whenever there was a fertility issue. Fast forward  to my IVF group and my leader mentions that she went to get a Mayan massage before her successful transfer. It sparked a curiosity in me and I made some moves and got one! Below is the who, what, where, and why of Mayan Abdominal Massage.

Mayan abdominal/uterine massage is an ancient technique that helps move the uterus back into place and increase blood flow. Most women’s uterus is tilted one way or another from all sorts of reasons. The way you stand, how you sleep, injuries… you name it. There is no direct link to a tilted uterus to infertility. The way I see it though, there is no harm in getting things back in line. More than just aligning organs, the massage is supposed to help get blood moving.

In Mayan culture, the uterus is the center of the body and where emotions are kept. This is similar to the eastern cultures and a lot of the Mayan philosophies align to the ancient Chinese thoughts (same stuff talked about in acupuncture).

In addition to the massage the therapist also provided me a number of options to try afterwards. This included: a vaginal steam (yep!), castor oil pack, daily massage routine, and uterine meditation cd. The vaginal steam (which apparently Gwyneth Paltrow is into but with crazy technology) is meant to help clear out any old “junk.” You do this before the transfer. I didn’t have time to do it but it didn’t sound too tough. The castor oil also has to be done before a transfer. Once again, didn’t have time due to travel.

I did however maintain the daily routine. She taught a step-by-step massage. It was super interesting because I now know where my uterus is and how to identify it when pressing my abdomen. After the transfer the routine changes because you don’t want to move the uterus. You do continue a light routine to help blood flow after transfer. 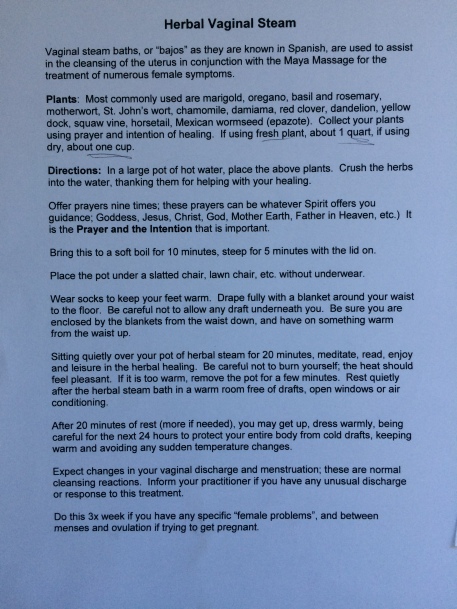 There are practitioners who are trained under other folks who have been trained in this form of massage. The massage therapist I worked with lived in South America for a while to learn the technique.

I was incredibly happy with my massage therapist because she offered me the option of an additional half hour to learn the techniques. She sat with me and explained the reasoning and purpose behind each move. She even gave me a massage ball for my neck and glutes!

I researched Mayan Uterine Massage and read reviews of different practitioners. Most of the reviews I read mostly talked about the effects the massage had on their bowel movements (another reason people get this massage) but overall it sounded like she was a great listener and was considerate. She was indeed both of those things.

She also gave me follow up documents that included additional things to try. I took each thing with a grain of salt and kept the mindset of, “If it doesn’t hurt, why not try it.” 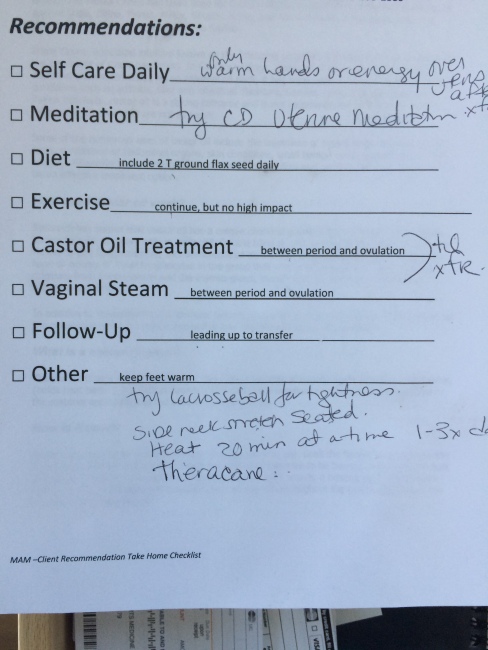 I have no idea if it worked (I guess we can speculate when we the 2WW is over). I do know my lining was great but I could not say definitively it was because of the massage since I was already on my estrogen in preparation for a transfer.  The only “cost” was financial and thus I say go for it. Worse case, you get a great massage and time to chill out.

Follow AN OVARY WALKS INTO A BAR… on WordPress.com